The Rambla is a pedestrian walkway circumventing the bay, from Isla Seca on the right completely bay around the corner on the left to Mar Bravo. Unbothered by automobiles, it is the favorite spot to stroll in Zapallar: morning, noon, or night. The pathway to the right of the parking lot to Isla Seca is described with that landmark, while this naration will take you to the left all the way to Mar Bravo.

The goodie cart at the beginning of the rambla is a favorite of the kids.  Be sure to try the cuchufils.  This little fellow from neighboring Horcon has been selling his cute little animal caricatures for years.

The restaurant Cesar’s spot on the rambla beachside has to be one of the most lovely settings for dining anywhere.  Cesar’s has evolved from a few seaside tables beginning in 1934 to the present day restaurant.  It will be difficult to get a table there during lunchtime in the summer.

The well-constructed walkway traces the coastline around the left of the bay.

Typical of the Rambla, there are benches along to way, to sit a spell and take in the beautiful vistas, in this case the colorful fisherman’s boats floating in the harbor.

The pathway takes your past the working harbor of Zapallar. Thoughout the day the fishermen get in their boats and head off to sea to try their luck at catching your seafood and shellfish.  Much of that is served in the Chiringito Restaurant, which has evolved over the years from a small fish stand into a destination spot.  Harbor activities have been expanded to include kayak rentals and scuba diving trips.

At the harbor, the fishermen are there to sell their catch (that is the delicious congrio hanging there).  There are also stalls where local artisans sell their wares.

Continue on through the Chiringito parking lot to pick up the rambla again and continue on to the Mar Bravo.  The vistas of the bay, Cerro de la Cruz, and Mar Barvo await.

This section of the Rambla ends at the Mar Bravo.  Here you can take in the sights of magnificent sunsets and spectacular displays of waves crashing on the rocks.  This would also be considered the beginning/end of the Zapallar to Cachagua walk. 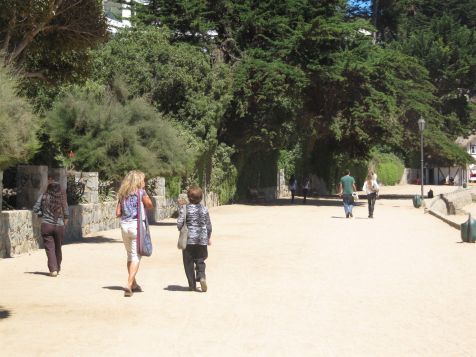 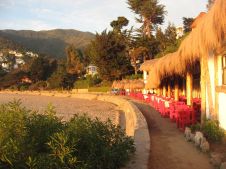 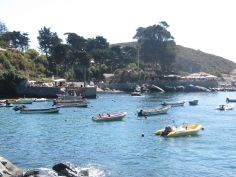 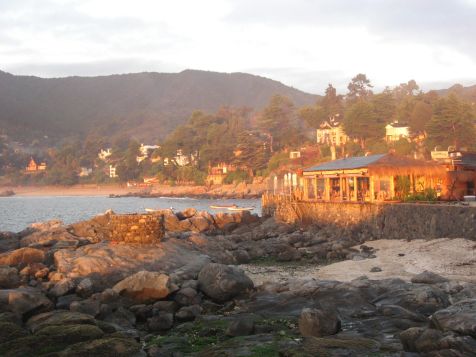 One thought on “La Rambla along Zapallar Beach”